Origin of Life: Accumulation of Formamide in Hydrothermal Pores to Form Prebiotic Nucleobases

Protein-protein interactions govern phase behaviour and stability in protein solutions. For this reason, they are relevant to the understanding of physiological and pathological processes, and crucial for the formulation and storage of biopharmaceuticals. Thus, a better understanding of protein-protein interactions and their effects as a function of solution conditions is bound to have an impact on a variety of health-related topics. 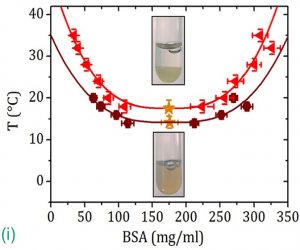 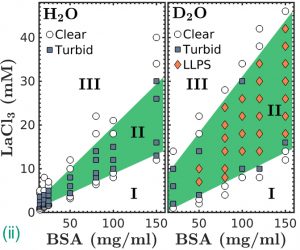 (ii) Appearance of a LLPS region in BSA-LaCl3 samples in D2O vs. H2O.
Copyright: University of Tübingen

Protein condensation issues are related to a number of diseases: Alzheimer’s and sickle cell anaemia are associated with aberrant protein-protein interactions leading to the formation of fibrillar aggregates in the brain and in red blood cells respectively; droplets of concentrated protein formed due to altered protein-protein interactions result in liquid-liquid phase separation (LLPS) as found in eye cataracts [1]. It is known from colloid science that shortrange attractions between colloids can lead to LLPS. Coarse-grained soft matter approaches employing simple models from colloid theory are often successful in describing the main features underlying the behaviour of protein solutions, although proteins are highly complex and feature a broad variety of interactions. In experiments performed in our group, we introduce short-range attractions by adding the trivalent salt YCl3 to aqueous solutions of the negatively charged, globular protein bovine serum albumin (BSA). LLPS is then induced by the Y3+ cations bridging the BSA molecules. We recently showed this LLPS to be inducible by a temperature increase, a rather unusual observation for globular proteins, and presented a picture of the underlying mechanism [2] (Fig. (i)).

Using ultra-small angle X-ray scattering, we observed the formation of a reversible “arrested state” in concentrated BSA-YCl3 systems at temperatures below the denaturation temperature of BSA. This state is similar to a gel of concentrated protein [3]. As protein-based drugs are increasingly successful, but the search for non-invasive routes of administration is challenging [4], these findings suggest a possible pharmaceutical application: concentrated native proteins in gel-like states could be promising for non-parenteral formulations.

Furthermore, soft matter-type studies on protein-protein interactions can improve the understanding of the behaviour of proteins under conditions normally used for their biological and pharmaceutical characterization. Techniques based on infrared absorption, nuclear magnetic resonance or neutron scattering often require the protein sample to be prepared in D2O instead of H2O. It is normally assumed that neither the structure nor the phase behaviour of proteins change significantly when H2O is replaced by D2O. Our recent work, however, has shown for BSA solutions that phase transitions such as LLPS and protein-protein interactions can be significantly altered when replacing H by D [5] (Fig. (ii)). Interdisciplinary approaches such as the studies described here highlight the relevance of fundamental soft matter research to the fields of health and pharmaceutics.

Note: This article was first published in July 2017 in the SoftComp Newsletter Issue 14.