The Theory and Simulation Platform 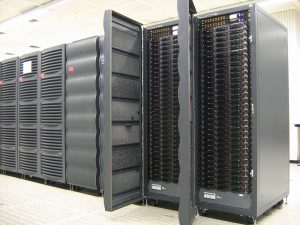 The SoftComp Theory and Simulation Platform has a dedicated computing infrastructure based on a Linux computer cluster.
Copyright: Forschungszentrum Jülich

Because soft-matter composites have complex hierarchical structures and dynamical properties, especially under non-equilibrium conditions, statistical and numerical techniques requiring large amounts of computer power are essential to describe their behaviour. The SoftComp partners therefore agreed to set up a dedicated computing infrastructure for the Network. Eight research groups invested 50 per cent of the funds needed, while the other 50 per cent came from the central budget. The Jülich Supercomputing Centre (JSC) at Forschungszentrum Jülich agreed to host and operate the facility.

A Linux computer cluster with a processing power of one teraflop was installed in 2006. Then, with additional funding from the German Government, the size of the cluster was doubled in 2008. The intention was to embed the SoftComp cluster users as a working group – a socalled virtual organisation – into the German D-Grid. In a grid, resources like computing power and storage are distributed among a number of locations. “The partners contribute their own resources and using the appropriate software particular jobs can then be run on the most suitable computer in the grid,” says Willi Homberg of the JSC. Within the Theory and Simulation Platform, theorists develop algorithms to tackle physical problems pertinent to soft matter, such as thermodynamic properties, structure, or flow behaviour.

“We are constantly improving existing algorithms to find the best way to solve a particular problem. Computer simulations complement experiments because they can explore the underlying physical processes and mechanisms in more detail or over a wider range of conditions,” says the Platform leader, Wolfgang Paul of Martin Luther University in Halle, Germany.

Please contact the theory groups for questions on the interpretation of experiments, theoretical backgroud or methodological problems concerning the respective technique: